The “Whey” on Protein

I Eat Grains and I Look Good!

Look Like A Body Builder While Eating Fruits, Grains & Potatoes!

One of the questions I receive after many of my On Target Living Seminars is how can I get a leaner & healthier body? I then ask a question back, “do you want to get leaner or do you also want to be healthy too?” The look I receive from some of the audience participants is priceless. They seem confused by my answer and they should be!

While speaking several months ago during the Q & A segment I received a few questions about the many diets on the market today and what were my thoughts? I said most diet plans do not work due to one reason– they are not balanced! They lack a balance of high quality carbohydrates, proteins and fats. If a diet program is not balanced then it cannot be healthy and sustainable! After the event during our sampling of Cod Liver Oil and Spirulina/Chlorella this guy comes up and asks, “what did I mean by high quality carbohydrates?” I said “when eating any macronutrient including carbohydrates your goal is to get closer to the source whenever possible!”

The Source is one of the three principles we teach at On Target Living; the other two principles are “Cellular Health” and “pH Balance.” He then said, “could I give him a few examples of high quality carbohydrates that are closer to the source?” I replied, “bananas, carrots, potatoes, and ancient grains are a few examples of carbohydrates that are the Source.” As soon as I got these examples out of my mouth he said, “bananas, carrots, potatoes and grains are poison,” he said this in front of hundreds of people going through the sampling line and waiting to ask questions. He was dead serious—his belief was that these foods were poison! The crowd then asked, somewhat in shock,“ are bananas, carrots, potatoes and ancient grains poison?” I immediately asked him to step away and that I would be happy to speak with him after the sampling was over. Unfortunately, he did not want to hear what I was going to share with him and left. His belief was that these source foods were not healthy and would make you fat. Are bananas, carrots, potatoes and Ancient grains causing an obesity epidemic here in the United States? Bananas taste great and are high in vitamin C and potassium; carrots are high in beta-carotene and are great for your eyes; potatoes and Ancient grains help boost serotonin levels and are high in energizing B vitamins.

I always had a fascination with muscles as long as I can remember. For my tenth birthday my mom and dad gave me 110lb barbell set. Who gives their kid a barbell set for their tenth birthday? Anyway, I would flex what little muscles I had in front of the mirror, in front of my brother, sister, mom or dad, or whoever would give me two seconds. I would flex my guns whenever given the chance! So in 1985, at 28 years old, I decided it was time to get serious, step up on stage and give it a shot. So I entered the Mr. Lansing Body Building Competition. With little nutritional knowledge, I followed the guidance from many of my bodybuilding buddies. I was told: “you need to bulk up and then cut down.” So I began my journey 18-months prior to the contest at a starting weight of 175 pounds. I then began bulking up over the next year and tipped the scales at my all-time high of 230lbs. That’s right—230lbs! I had gained 55 pounds! I did this by consuming lots of calories, protein shakes, and amino acid supplements. My skin was a mess, my body grew all over, and I was now wearing 36-inch pants for the first time in my life. I was following the plan and it seemed to be working? Now came the cutting phase. For the next 14-weeks I went from eating a ton of food to a very specific, deprivation type program. I was eating egg whites with vegetables for breakfast, lean meats and salad for lunch, orange roughy with a little rice, vegetables and maybe an occasional fruit for dinner. That was it! The last 6-weeks prior to Mr. Lansing were brutal. I was guided to cut out all fruits, no more oatmeal and just have eggs, lean meats, and lots of vegetables and salads. At the time of the contest I was in fantastic looking shape, weighed in at 170lbs, placed 5th out of 18 contestants, but I felt horrible. My strength was down, I was having trouble sleeping, and my energy was at an all-time low. But boy did I look good! Competing in Mr. Lansing was a fantastic experience. I learned a great deal about myself but walked away thinking I would never compete in a bodybuilding contest again. 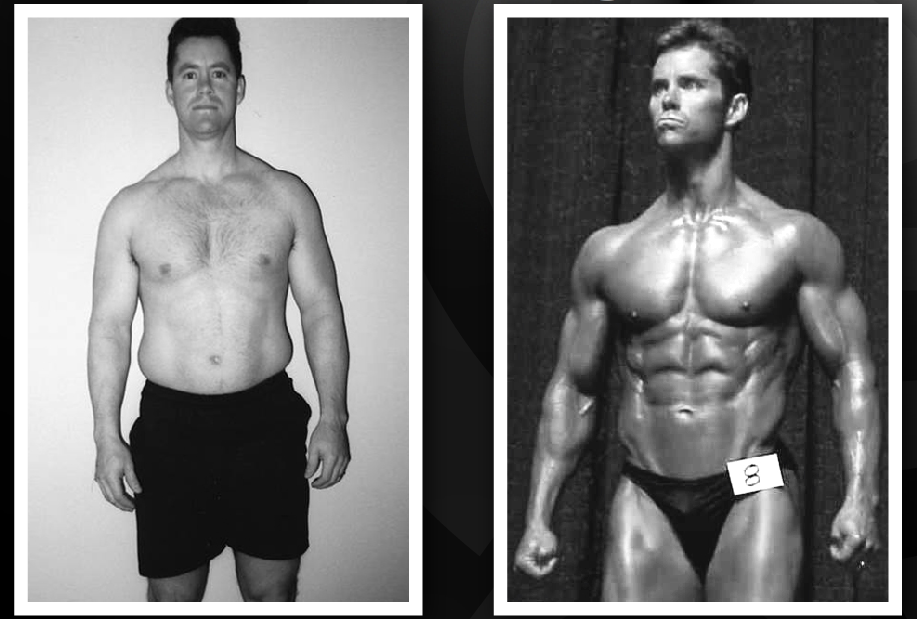 After taking a fourteen year hiatus from my first bodybuilding contest, becoming a parent of boy and girl twins, graduating with a Masters Degree in Exercise Physiology, and now the Director of Health, Fitness and Personal Training at one of the largest health clubs in the world, I decided to take another crack at the bodybuilding world. I again bulked up to 212 pounds and competed at 168lbs. The cutting phase of the program this time was much healthier and I felt much better. I placed second in the Master Division and it was a much better experience this time around. Driving home that night I thought—why would I get heavier and compromise my health to compete? There must be a healthier way than to bulk up and then cut down? 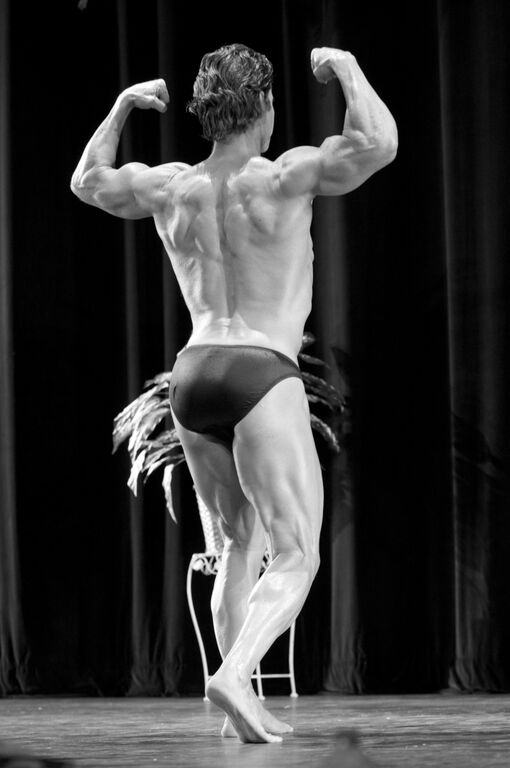 With a new strategy I was primed to see what I could do. Prior to the contest I weighed 178lbs. I felt I was training hard and already in pretty good shape—so for 12-weeks prior to the contest I was going to eat only from the two center green circles of the Food Target. If a food had more that two ingredients I was not eating it. It was an easy concept to understand but not so easy to execute. I did not cut out any macronutrients. I ate fruits, oatmeal with raisins, potatoes, vegetables, figs, macadamia nuts, lean meats, eggs, coconut, flaxseeds, cod liver oil, spirulina/chlorella and frozen wheatgrass ice cubes. Your not so typical body-building program. That year I won my first contest at the age of 45 weighing in at 166 lbs. I had only lost 12 pounds and I felt great. 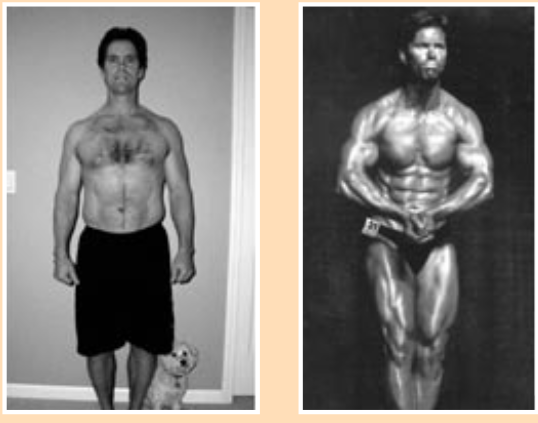 For this contest I used the same strategy of eating in the center of the Food Target for 12-weeks. I began my journey weighing 179 lbs and competed at 165lbs and won the Grand Masters at the age of 52. 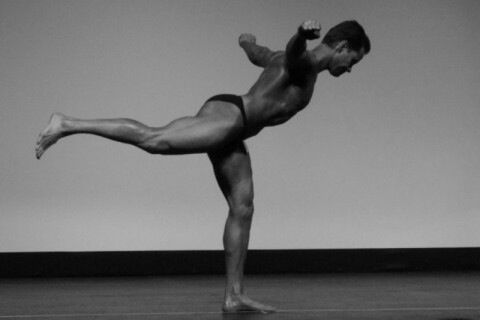 At this point, I was on a role and used the same strategy to train for this contest of eating in the center of the Food Target for 12-weeks. I began my journey at 178lbs and competed at 163lbs. I won the Grand Masters at the age of 55. Not bad for an old guy huh? My eating plan prior to competition looks no different than my normal eating plan except I eat less calories, eat more frequently, and take no liberties for 12-weeks!

Here is a sample of my eating plan 12-weeks prior to competition! Happy birthday to this cool dude 😎 who still le